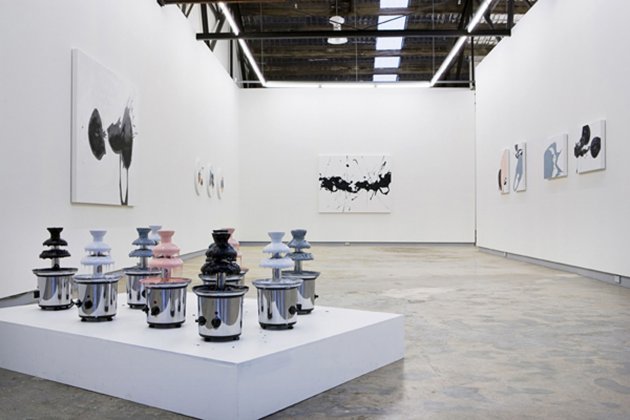 PaintingCatalogue Essayby Cameron Tonkinwise, Parsons The New School for Design, New YorkEach modern era believed that it had found the material that can be all forms: cantilevered poured concrete, streamlined pressed steel, inflated molded plastic. Interestingly, each era by contrast was also characterized by quite ascetic art explorations of the very stuff of painting - paint: suprematism, abstract expressionism and minimalism. It is as if, in reaction to the hyperbole of those era-defining built environment materials and processes, artists returned to the original mimetic material that has accompanied all human development since cave painting, blends of oil and stone (as James Elkins once called it in his book on painting as alchemy). Today, parametric animation software, laser cutting and 3D printing are once again creating a faith that any form, even the unimaginable, is now buildable by the architect and perhaps soon the home shopping fabricator. And again these developments are being accompanied by concerted explorations of paint, a 'movement' that a recent symposium at Artspace Gallery called 'Expanded Painting.'  Contrary to Rosalind Krauss' article from which that title derives ('Sculpture in the Expanded Field'),  these works are not trying to sustain painting by combining it with other media; but rather, in a way that seems quite post-conceptual and even anti-installation, they are more about expanding our sense of painting by focusing intently on the material itself, interrogating the possibilities and limits of its plastic colours. (The artists discussed at Symposium included Franz Ackerman, Akira Akira, Hany Armanious, Dale Frank, Julia Gorman, Katharina Grosse, Jim Lambie, Nike Savvas, Adrain Schiess, DJ Simpson.) Stephanie Smiedt's work seems to be clearly within this area. Paint, in all its aspects, is on display: amorphously wet; hardened drips; on paper and canvas; up-close as a material, in the middle distance as a colour and form, and from afar as a representational image. The overall effect is like a study, in the musical sense, of paint. Drips are literally magnified, uncannily, for interrogation, examined with respect to their own form and properties, but also by way of contrast with more pictorial images and the frame. This is in keeping with the researcherly way in which Smiedt has been working. Her previous exhibitions included an array of drip studies, tabulated by form and color. By comparison, this study is more focused. There are fewer variables for example. The palette has been minimized to grayscale, apart from the humanizing flesh tone - though the process of enlargement reveals the multitude of colours at work in any apparently simple and uniform colour: blues and greens shine out where black paint thins for example.There is another dimension to Smiedt's work though. Conventional painterly explorations of the materiality of paint are defiantly craft-based. The tools and techniques are traditional and hand-manipulated, and the end-result tends to be the obliteration of the making process - only the material itself remains present in the artwork, as if un-made and naturally fully formed. Smiedt's works however are produced through digital techniques, and evidence of this process remains clearly in the work. I am not revealing a secret by exposing how the images are made - this can be read from the works themselves, and from the way Smiedt exhibits them. These are drips of paint on paper, digitally scanned, enlarged, digital offset printed, cut out by hand (not laser cut - the inaccuracy of the human knife work leaves white borders around the thinnest sections of the drips), adhered to the canvas, and then repainted and lacquered. This is why the drips have a raised dimension, even traces of joins when viewed at close proximity.This suggests that Smiedt is studying paint by translating it into and out of the digital domain. What is found is perhaps something about how essential the material of paint is to a phenomenon like color, how color is material and not merely visual, something that cannot be easily simulated by screens and lights. Smiedt struggles for instance with the inaccuracies of the digital. Despite being a realm of calculation, the computer scans have color variations that are amplified in the vagueries of the printing process. A kind of truth in color only comes by retouching the printouts with paint, as if the actual physical media alone can manifest real colors.This taming of computer hubris by the crafting of paint is not polemical. The paint is not defiantly more present than the printout. There is casualness and honesty to the way these aspects of the digital translation process remain in the final work. It is as if Smiedt is telling us to be less paranoid about claims about digital demiurges, and instead take quiet pleasure in the familiarity of paint, the material coloring of our world that has accompanied us all our days on this earth.