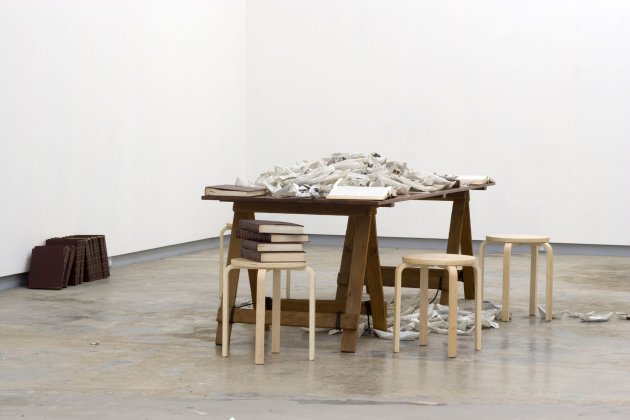 Simryn Gill, in her prodigious cunning, would in this exhibition insinuate us in an enterprise of labour. We don't mind, for what we are asked to do hauls us into the inner scuffle of her art and art-making, and the little paper boats we make form a scrap book, a souvenir of our happy meditation on her work. At the end of it few of us, I think, would let pass the tender, revered sense of tragedy in this latest of Gill's offering. Nothing much is amiss, in these febrile digital days, in ripping pages off a dated set of Encyclopaedia Britannica scoured from the St Vincent de Paul op-shop. Faced with the new DVD format and subscription-based website, and Google's fast easy retrieval, few regret its passing in the printed form. Still we miss the dark-mauve tomes of facts and knowledge, full of the shelf dust of datedness, with their mandarin scholarly authority and efficient index system. Perhaps we miss them because the strewn depletion of these volumes signals the depletion of words themselves, and with this the significations that were our history and constructs of our world. Who could bear to think that our once memorable world dwells now in its alternative fate as cardboard boxes or toilet rolls?

The foremost quality of Gill's project comes across as its rescue mission. The encyclopaedia, each bulky volume a stranded whale on the beach of words, bids us to liberate it from the dead hulking form. We are asked to participate in the labour of this transfiguration. With our fingers, their nimbleness strained by arthritis and the use of the computer keyboard, we turn these printed pages into the playful shapes of origami boats. The final objects are strange, bereft of their former textual glory but with a touch of a new mischievous grandeur. It is much like the Chinese mortuary ritual: the burning of paper Mercedes Benzes and bungalows - installed with servants and refrigerators - and trillion-dollar 'hell money' releases their airy significations of riches and social remembrance and sends them to the underworld. In their new life, these ritual objects, transformed and reborn, enrich the dead and their lives are made more comfortable by these artefacts of the caring solicitude of the living.

It is strange to think of the act of destroying something - burning ritual items and ripping pages from books - as giving the old form a new life, and like an archaeologist's trowel, excavating and archiving the original meanings for our later use and recollection. With anthropology's aid, we begin to see where all this is going: the metamorphosis of the encyclopaedia's pages - plantation of noble discourses and ponderous rationalism - into grass-like boats is proactively an act of remembrance. And again as in the Chinese mortuary ritual, the differences are, well, paper thin between this and the other world, between the past and the present, what we remember and the rules and values we now live by. Gill is too subtle, too confidently brilliant, to have to make these clumsy writerly inferences. Her method is like the unfolding of a fragile, ancient script, leaf by leaf. As we have come to know from her work, say the enigmatic fruit-in-the-face A small town at the turn of the century (1999), or My own private Angkor (2007-08) also featured in this exhibition, with its glass sheets in abandoned houses, each an imprint of grey melancholy and ghosts' half-shadows, Gill has the prankish yen for dropping a hint or two.

The year embossed on the spine of each volume is 1968. 'Ah! 1968', you can hear the baby boomers sighing in nostalgia. It was the year of the Paris student riots, which with the general strike paralysed the French capital. The dramatic, violent few weeks in May brought the De Gaulle's government to its knee. The Paris riots were certainly the most famous, most romantic; but in that year mass protests also erupted in Prague, Madrid, Mexico City, London and Chicago. There has never been quite another year like 1968. Each of these demonstrations was ignited by its own causes and political conditions - the Soviet repression, the brutal political regime, the Vietnam war, the campus authorities and their outdated syllabus - but led by students, they took on the quality of spontaneous youth rebellion. Certainly in Paris, the protests were unplanned and poorly defined, with a fiery momentum that took everyone by surprise; and the revolution of the cobblestones damn near succeeded. Forty years on that is how we remember the eventful year.

One can never be sure if Gill's work is meant to make connections with the events forever associated with 1968. Artists, in any case, would disavow such considered intention in their practices. Nonetheless we take the liberty, in that strange democracy between artists and their audience, between aesthetic objects and their interpretation, to take those bulky volumes and the paper boats made from them as aligned to the students riots and mass protests. In a way, I suppose, we can't resist it. Our passing of years makes us look back at the youthful idealism and romantic spontaneity, which had, for some of us anyway, thrust us into the eye of the political storm. Now, we face a crisis of another kind, brought about by the same fault line of capitalism and the economic and political systems that sustain it. Suddenly we find ourselves listening out for the calls to action and mass demonstration, less motivated by our own tender nostalgia, than by our yearning for the unruly revolutionary political passion that could, as it once demonstrated to us, change the world.