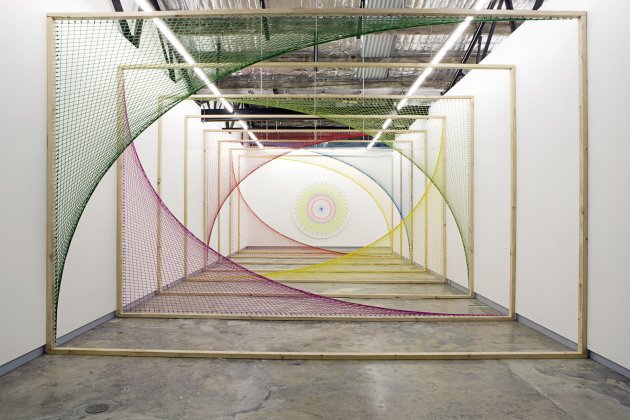 by Patricia EllisSliding Ladder consumes the gallery as a maze of laser thin beams; eight force fields deep, each expansive panel supports a kaleidoscopic candy coloured mesh, ordered as a receding chromatic tunnel, ever beaconing, entrancing, to a hypnotic mandala supernova, an all-seeing talismanic evil-eye. Simultaneously architecture and pure light, geometric and organic, bending time, space, and sensation in its illusory web, Sliding Ladder encompasses, transports the viewer in its trippy new age vortex. A physical manifestation of hyper-space, or the refracted baptismal rays of some divine power mapped out in diagrammatical science, the effect is alluvial, virtual and sublime, like entering a lustrous future-temple of immaculate aura. It’s an experience of space-age hippie nirvana or rapturous science fiction epiphany, as evasive as in dreams, palpably measured out in finite contours, in lengths of ... wait for it ... wool. Welcome to the world of Nike Savvas, where magic’s made real, and chintz is triumphant, and the celestial, extraordinary, otherworldly are ... um ... common.Bespoke by Halves(Big Fat Greek Ozzie Sculpture and Maths) A wee forewarning to the sensitive among us, the following text may cause offense through its intentional use of post-colonial irony. This brand of off-colour humour parodies the brutish ignorance of cultural stereotypes to recontextualise them as effective tools of empowerment. Exaggerating perceived social ‘deficiencies’ and ‘differences’ to heroic, triumphing proportions (which is the central ethos of Nike Savvas’ work), this text performatively draws from the prosaic typecasting put forth by block buster films such as My Big Fat Greek Wedding and Crocodile Dundee to further celebrate and champion the fantastically gregarious and self-created contemporary mythologies of Greek and Australian nationalism.  In England, we call this “taking the piss” and it is a custom that may only be performed amongst friends. If you’re not offended, however, it’s not such a bad thing: it shows you have a predisposition for the finer points of meretriciousness. And if you are, well, apologies in advance. In England, we also have another saying, “If you can’t beat ‘em join ‘em.”One thing about the Greeks is that they have no taste; it’s not that they can’t taste, but rather prefer to swallow life whole. Their appetites are ravenous, awe-inspiring and bottomless. They decorate their houses like Las Vegas went on sale at an all-Hellenic discount factory, will wear any outfit as long as it includes floral print and brocade, consider a 14-course banquet to be a light snack, and have elevated idle gossip to an Olympic sport. Aussies, on the other hand, are outback innovators: ever ready with their can-do attitude of booze-fuelled optimism, they can shear a sheep, wrestle a crocodile, and bitch-slap you three times running without ever taking their eye off the barbie. In short, they take efficiency to a whole new, if slightly threatening, level.[i] There’s no doubt about it, all the very best things are made up by halves, and the very, very best is Nike Savvas. Both Greek-Cypriot and Australian, she lives between London and Oz; and at 6 feet tall and a dead ringer for Angelica Huston, Nike will be the first to tell you that she’s often mistaken for a bloke, though she’s 100% all woman. Herself being neither one thing nor another, neither here nor there, Savvas’ art resides in the realm of liminality: synchronously formalist and narrative, incomprehensively beautiful and tacky, handmade and prefab, hers is a future brand of sculpture that surpasses existing limitations. Sculpture as we know it comes with certain rules: it has three-dimensional form that occupies physical space, and strives for a certain material and aesthetic purity. It resides in the realm of the bespoke: elitist, one-of-a-kind creations, luxurious and indulgent, catering to the hard-core connoisseur … and then there is Greek Cypriot Ozzie sculpture. Everyone knows that Down Under they do things backwards … and they just won’t stand for snobbery.
It’s a little known fact that more than 10% of shoppers modify the products they buy to better suit their needs. This doesn’t apply to minor things, like shortening trousers or reupholstering your sofa, but a more determined approach to correcting the inadequacies of available options. Liquid Paper was invented by a typo-prone secretary who mixed tempura paint with a bunch of other household stuff in her kitchen blender[ii]; mountain bikes were developed by a group of guys who took a fancy to riding flat-tired bikes off-road and evolved a more durable velocipede from a mish-mash of found parts; and the sports bra was the brain child of two abundantly-chested women who had the divine inspiration to stick two jock straps together and wear them upside-down as a halter[iii]. The thing with all these products is that they are cobbled together from existing products. They are user-tailored modifications, overcoming the flaws of off-the-shelf ordinary.[iv]