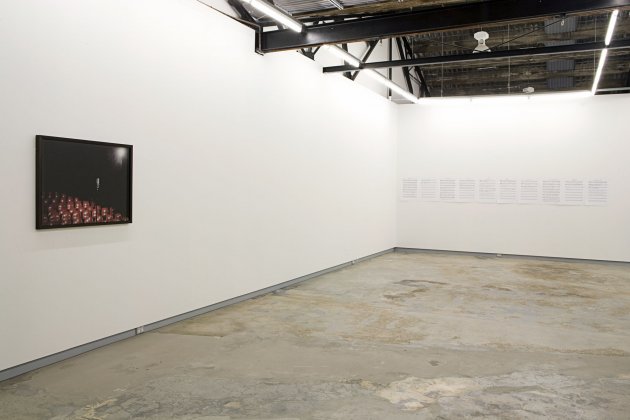 Kate Murphy is an artist who uses the video medium to document people and places that have particular significance in her life. Family and friends make frequent appearances in Murphy's videos, along with the artist herself, while her recent works have employed performers to realise increasingly ambitious scripts. The note (2010) builds on a body of work that investigates themes of remembrance, mortality and loss, its title a reference to a suicide letter in the artist's possession. Murphy collaborated with a composer and singer to realise this work, transforming words into song and locating the piece in an empty theatre. In its pared-back visual style, The note sits between celebration and commemoration as a lone woman on a stage addresses an absent audience. Her face is never revealed in the video and she acts as a vessel for the note, her final hour a stage-call with no witnesses.

Murphy's videos take the form of single and multi-screen installations. Several works have employed two cameras, one operated by the artist and the other by her subjects, who are invited to document themselves in parallel. The opening up of narrative structures and presentation of multiple viewpoints is central to these works, which allow their subjects a degree of autonomy and self reflection not usually permitted within a traditional documentary format. Other works have seen Murphy place several cameras around a room so that their subjects are filmed from different angles, capturing fragments of conversation and revealing the ways that the camera can actively shape our interpretation of events. The use of multiple cameras also mimics the format of reality television, a medium widely embraced both for its informality and personal revelations.

Murphy has spoken of her strong interest in the documentary genre. She cites the filmmaker Michael Apted as significant, and in 2007 created a 'partner piece' to her 2000 video work Britney Love in response to Apted's own Seven Up series which documented its human subjects at seven-year intervals. Britney Love is something of a signature piece for Murphy and features a precocious young girl who the artist met while living in Glasgow. In the work Brittaney confides her aspirations for life and fame and performs to her namesake, the pop singer Britney Spears. The follow-up piece sees its protagonist at aged eighteen, performing for the camera as though she is auditioning for a ‘screen idol’ reality television show, her ambitions intact. Murphy says: ‘I am interested in how documentary, in its many forms, surrounds and influences us. The codes and conventions of documentary film, photography and television all intersect in my work. Through the investigation of these documentary attributes, I examine the role of the subject, the camera, the director, the installation and the viewer.’ Describing her approach as ‘multi textual’, Murphy’s video works call into question the documentary genre as much as they draw inspiration from it.

Portraiture forms a refrain in Murphy’s video works with their recurrent focus on family and friends. Several works to date have also explored the self-portrait genre, each chronicling an aspect of the artist’s life, travels, obsessions and fears. In 2002 we see Murphy singing pop tunes on the sofa in her living room, in the style of a home movie (I’ve been to paradise 2002). In 2006 we see her within the harsh coastal landscape of Ireland, exploring themes of translocation and her family heritage (Self portrait landscapes (Ireland) 2006). Most recently we see her crying before the camera in a forlorn party hat, listening to audio tapes of psychic readings she has undertaken in Dublin, New York and Sydney (Cry me a future 2006-08). Blending personal narratives with those of the people surrounding her, Murphy's video works form individual and collective portraits in which themes of intimacy and reflection replace conformity and homogenisation, twin catch-cries of today’s media-saturated culture.

Murphy first came to prominence with her video work Prayers of a mother (1999), a five-channel family portrait focussing on the artist's mother and her daily prayers for her children’s well being. Since this time, Murphy’s works have addressed themes of mortality and death through her father and grandparents (Joe Hill 2003, Leaving together 2005). Ideas about expectation and the search for life’s ‘answers’ are further explored through her own psychic readings, and in a scripted interview with a psychologist which she produced with her brother and writer, Paddy Murphy, using an actor in the psychologist’s role and the therapeutic encounters of friends for material (The appointment 2009). Daily rituals, from prayer to dance, also feature in Murphy’s videos with young children. These works hark back to the artist’s own Catholic upbringing and her interest, since childhood, in performance (Rehearsal (for Saint Vitus) 2007, Assembly 2009). A keen dancer, we glimpse something of Murphy herself when she films the aspiring young singer/dancer Brittaney Love at aged eleven and eighteen, while Murphy’s own energetic rendition of Charlene’s ‘I’ve been to paradise’ suggests a failed (if ironic) screen test.

The note, while sombre in tone, brings these concerns together in its investigation of narrative form. Presented as a single take, it is the ‘final performance’ for its anonymous protagonist – an opportunity to say goodbye to friends and loved ones. Like many of Murphy’s works, The note combines the melancholic and the banal, the words of the suicide note expressing gratitude and love to its intended recipients while offering needle-points as gifts and jokes to ease their pain. In conceiving her work, Murphy invited Sydney composer Basil Hogios to respond to the suicide note in musical form, his resulting composition falling into three ‘phases’: prayer (talking to God), darlings (talking to loved ones) and instructions (courses of action). Actress Melle Stewart’s delivery of the lyrics upon the theatre stage is both poignant and spare. Three photographs accompany the video, one depicting the empty stage and microphone staring out across rows of unoccupied chairs. The other two photographs depict Stewart with her back turned towards us, her arms by her side and then raised as though in prayer or supplication.

The note is one of several works by Murphy that present the ‘portrait’ indirectly. The protagonist’s back is turned and her face is not revealed over the work’s ten-minute duration. In this regard The note returns to one of Murphy’s earliest pieces, Prayers of a mother, which portrayed her mother through the expressive motif of the woman’s hands, holding rosary beads and prayer sheets. In the work we hear her disembodied voice reading prayers for her children and watch the artist and her siblings respond with laughter and tears, on four surrounding screens. The portrait through absence is doubly instated in The note, a piece in which the protagonist is literally absent though death, her voice channelled through the work’s composer and singer respectively.

Documentary and popular genres intersect in Murphy’s video practice. Originally a photography graduate, Murphy draws a parallel between static and moving imagery though her work and reunites both forms in The note. Transforming the written word into song, and loss into quiet commemoration, it opens up a new path for Murphy’s art today.