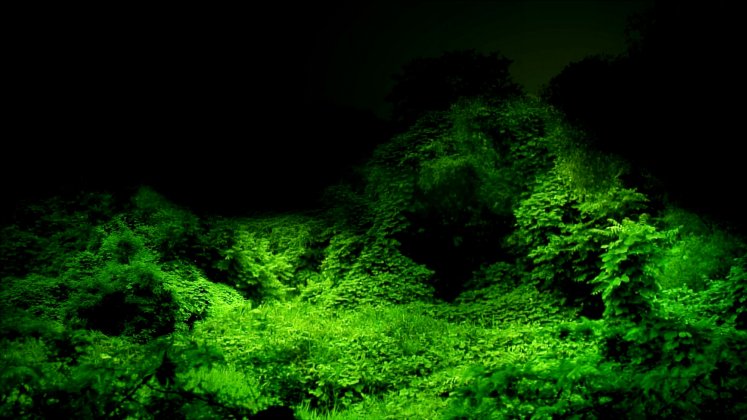 An abstract from Andrew Murphie's Joyce Hinterding and David Haines: High Res Resonations with the Milky Way. Murphie discusses the original installation ofElectromagnetique Composition for Building Plants and Stars in the Toyo Ito-designed, Sendai Mediatheque in Japan, 2007.-------------------The title of this work accurately describes the formal nature of the composition - although what especially concerned Haines and Hinterding in making the work was the 'wildness' or hidden energies in the building, plants and stars that were waiting to be brought into the composition. Hinterding and Haines were given two weeks to explore the area around the Sendai Mediatheque in Tokyo, with portable antennae for audio recordings of electromagnetic fields, and hi-definition digital video recorders. They produced what in many ways is a signature work in its precise economies, large scale, and engagement with both physical and ambient environments. The work also indicates what Hinterding describes as a shift (or considering their first work, Undertow, a return), to work with the architectural in relation to the electromagnetic and other previous ecologies with which they have engaged. Haines points out that this is architecture as much concerned with invisible forces, or 'walls of sound' as visible structures. This work involves a shift in scale as well, and it has been this project (as well as building their own house) that has crystallised a desire to build entire structures in future works (such as an anechoic chamber).Specifically, Electromagnetique Composition for Building, Plants and Stars involves both digital video of slightly shimmering foliage, and a huge antenna (a copper coil) worked into the structure of the radical Toyo Ito-designed building. Aside from its sculptural beauty, composed with the building itself, the antenna picks up low frequency radiation from within the building, from around Sendai, and, most interestingly perhaps, from space, the Milky Way. Other tangles of copper wire were placed in vitrines and also plugged into the sound system. The sound is a mix of this received signal and the field recordings from around Sendai. The digital video is also drawn from 'field recordings', is this case of the foliage beside a river running through Sendai. There was very little compositing, but an amplification of the green levels, accompanied by a transformation of day into night. Haines was told it looked like footage from a well-known Japanese horror film.Such works demonstrate Hinterding and Haines' sophisticated ability to bring new worlds of resonance into being. Their work gives us new felt experiences within which we can truly contemplate the often beautiful, but also threatening, new ecologies within which we now have to find new ways of living.