Debra Phillips | The roundest object in the world 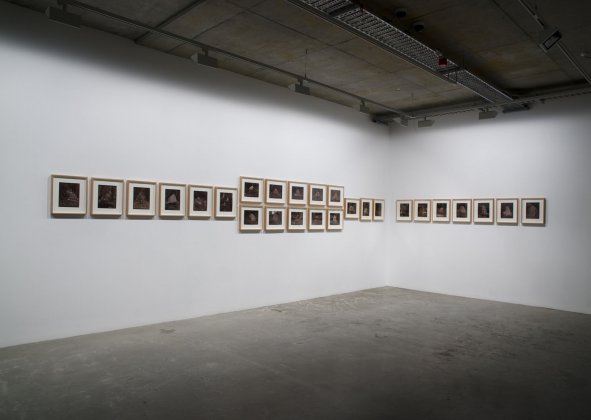 Debra Phillips, Exact (non-working) replica of the No 1 Kodak camera, hand made by craftsmen in the traditional workshops of The Early Music Workshop in Bradford to coincide with the centenary of ‘The Kodak’ in 1988, pigmented inkjet print, 45 x 45 cm (image size), 69 x 69 cm (paper size), 71 x 71 x 5 cm framed

The characteristic conical beginning from a trial boule of high purity single crystal silicon produced at the Institute for Crystal Growth, Germany (grey)

Silicon sphere produced in 1988 by CSIRO Precision Optics and the National Measurement Institute in Sydney as part of a long-standing and ongoing worldwide project to redefine the international standard unit of mass, the kilogram (grey)

Debra Phillips' second solo exhibition at BREENSPACE, The roundest object in the world, takes its title from a series of near perfect silicon spheres recently produced jointly by CSIRO Precision Optics and the National Measurement Institute in Sydney as part of the international Avogadro Project ­– an attempt to provide a new standard for the kilogram, a measure used in and linking science, commerce and everyday life. These technologically innovative spherical forms – the product of advanced science and international collaboration – are also modest and beautiful hand-finished objects.

The kilogram is the only one of the seven standard international units of measurement that remains defined by a physical object, rather than a fundamental constant of nature. This object is the ‘International Prototype’, or ‘Le Grand K’, a cylinder of platinum and iridium stored in a vault at the International Bureau of Weights and Measures near Paris. Despite the strict conditions under which it is stored – for example having been handled only three times in over a century – the object is materially changing (ever so slightly becoming lighter) meaning that the standard measurement for mass is, in effect, unstable. For this reason two major international scientific projects were instigated in order to find a replacement standard for the kilogram – one not based in a physical artefact.

One of these projects, the Avogadro Project, seeks to produce an object made from a single substance – silicon – that exactly equates to the mass of ‘Le Grand K’. Successfully completed, the number of atoms comprising this object could be calculated and thus the standard measure for the kilogram shifted from an object to a calculation based on the atomic structure of isotopically pure silicon. In other words, the Avogadro Project seeks to produce a perfect object that would, in fact, permanently dispense with the need for any object – including itself – to act as a future standard definition of the kilogram. This ideal object is a sphere, with no edges that might be damaged and only one dimension required to calculate its volume.

CSRIO Precision Optics in Sydney is the only centre anywhere with the capacity to produce a sphere with such accuracy. To date they have produced 14 spheres as part of this project, the last two being fabricated from an almost perfect crystal grown from monoisotopic silicon that was purified in ex-Soviet centrifuges once used to refine uranium for nuclear weapons. Final shaping of the spheres has been undertaken by renowned lens-maker Achim Leistner, working by hand to spin and grind and polish the sphere – ‘massaging atoms’ – to as close to perfection as possible. (The spheres are the ideal size for working by hand.) The best sphere the Precision Optics team has ever made has been measured as having a total out-of-roundness of 35 nanometres (that is, the diameter varies by an average of only 35 millionths of a millimetre) making it arguably the roundest object in the world.

The paradoxes are fascinating. The technological advancement underpinning these spheres and the scientific investigation they are bound into is almost incomprehensible – and certainly difficult to apprehend when confronted with their matter-of-fact, hand-crafted simplicity. Whilst there are multiple numbers of them, they are part of a project seeking singular perfection as well as their own obsolescence. They are pitched at an absolute, an ideal by which we measure, act within and understand our world. Yet they are simply physical ‘things’.

Debra Phillips merges this scientific pursuit with that embodied within photography. She has produced studio photographs of one of the spheres; a polystyrene model for a sphere (a kind of ‘thinking’ prototype bearing preparatory markings); and the conical beginning from a trial boule of high purity silicon used in the production of the spheres. These objects are each individually photographed in front of a red, a green and a blue background (the three additive primary colours that if brought together as coloured light beams produce white – that collectively disappear into the basic condition of light) and are printed at a 1:1 scale. Each, along with a hand-held replica of a Kodak No. 1 camera, is also photographed before a grey background, resulting in a total suite of 13 photographs.

Partnering these works are a further suite of 26 photographs, an alphabet of termite mounds – each an individual and idiosyncratically self-contained, perfect world. Phillips photographed these in coastal bush areas in southern NSW using a large-format film camera. The resultant negatives were then digitally scanned and output as larger sheets of film in order to produce gelatin silver printing-out-paper (P.O.P.) prints. Due to the nature of the printing process, each of the photographs has a slightly different tone ranging from a warm chocolate brown to a deep purple brown.

The roundest object in the world therefore includes photographs of fabricated forms drawn from both the worlds of nature and of advanced science that focus our attention upon moments when systems of knowledge and understanding – including measurement – crossover into the realm of making, thinking and shaping world views. This is often the point, photographically evoked, at which one technology passing into obsolescence momentarily touches another just emerging. By using an out-dated printing process to realise some of her photographs, Debra Phillips collides new ways of conceiving the world with aspects of its disappearing past. This state is further evoked by her small tree of wax fingerprint impressions of master lens-maker Achim Leistner, a humble acknowledgement of sorts to the fine quality of the archaic and hand-crafted in an age of advanced technology, yet also provisional and akin to a photographic negative awaiting its use in the production (here via casting) of a final, complete work.

The roundest object in the world implicitly questions whether it is possible to enhance, even simply apprehend, perfection photographically. Or are perfection and the absolute necessarily just beyond apprehension, always just out of frame?


This project has been assisted by the Australian Government through the Australia Council, its arts funding and advisory body