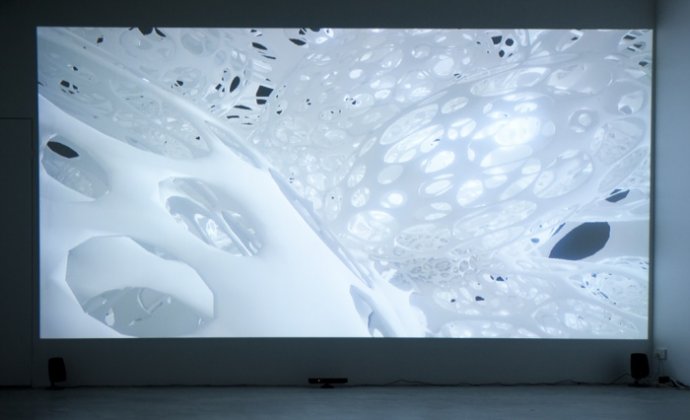 Monocline: white cube extends ideas explored in an earlier version of the work presented at Super D-Lux at Artspace for the Sydney Biennale, a work that was built as a virtual architecture to explore sound within a 3-dimensional sound-field.

Haines and Hinterding have for a long time been developing work with unusual technologies that attempt to satisfy their desire to explore realms beyond the material – even though both the artists are heavily engaged with real-world objects in their individual and collaborative practices, at the heart of their practice is the desire to create encounters with things not normally perceived, by way of things like resonating minimalist sculptures that listen to the sun, or Kirlian images that reveal the auras of plants, or through the use of aroma to make smell compositions, or sound worlds that reveal the electromagnetic.

An important aspect of their practice has been to extend the possibilities of the moving image – often by way of digital synthesis and virtual technologies that help to create a veil between real world phenomena brought into the gallery and a fabricated world of the imagination that is intensely hallucinatory and even though they have extensively worked with video installation over many years, they have always strived for a medium that straddled the world of the sculptural diorama and cinema – this has lead them to work with virtual reality software – a set of development tools that come from the gaming industry that has been readapted in the Artist’s studio to become an arena where there ideas could play out in a kind of virtual sandbox. They could work between presenting singular virtual sculptures that border on the impossible, work with 3-dimensional soundscapes, artificial intelligence, new moving image editing paradigms, new interfaces for audience interaction, build interfaces to other sculptural elements in a gallery setting, generate algorithmic objects, explore impossible architecture, imagine new landscapes and intermingle this with real world phenomena including soundscapes and explore powerful aesthetic fields relating to optical phenomena including colour and light.
Within the Work.

Monocline: white cube allows the viewer to explore a giant virtual sculpture that extends into multiple spaces from a mass of white holes that form a baroque sphere to shards that are floating in a yellow fog that is like powder. This virtual sculpture is in touch with the viewer by way of a sensor that locates the audience member’s body within the gallery space.  This means that to lean forward takes one through the image that fills the wall of the gallery space.  A sweep of the hand moves the direction of the image in sympathy with the gesture.  We find it fascinating that a person viewing our work can swoop like a bird and be as one with it.

We have always seen this platform and technology as something with great potential where we can provide a stage or a setting that people can explore at their leisure and that breaks out of the logic of violence that computer gaming technology seems so intrinsically geared towards and indeed as we have discovered at the level of code is set up to fast track the developer towards achieving that particular commodification. We are interested in the way that the work produces events that engage the viewer in an immersive situation where something as simple as say the colour yellow can be totally empowered (as it has been in painting) and that there is this bodily relationship between seeing and movement and gesture for the person who comes into contact with the work.

We like the way in our virtual settings, objects contain narrativity by way of recognition but they have broken out of cinema narrative in the traditional sense when it comes to the presentation of moving images. We like the way that at every turn the work shows us another space that even we as creators haven’t seen – the continual multiplicity of the cameras movements do this break out because the cameras viewpoint is being handed to the viewer, everyone becomes a cinematographer in this work and with each new viewer comes a different angle and wholly new framing of the world.
We see this work as being both gentle and yet powerful. A way to show things that we could barely be able to realize in the physical world, room after room of intense sculptural forms glowing in a sea of yellow fog…in a world that is increasingly challenged by the energy of materials – earth, metals, timber, landscapes we also wonder if this new medium might not hold out a tantalising possibility that it might be a way for people to  encounter forms and objects of art  that are both material and immaterial and yet  that have been produced in the ether  that are on a scale larger than would be practical to physically manifest in the real world  that still hold great presence.