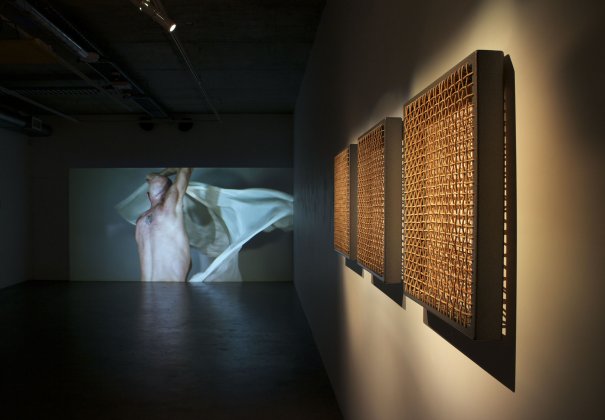 It’s no surprise that Dani Marti looked up old friends upon his arrival in New York, where he recently participated in the Australia Council’s Visual Arts residency on Greene Street. He tends to form unusual bonds with his subjects, often embarking on life-long friendships formed in the privacy of homes or in the controlled environment of his studio. These are interior spaces and intimate relationships, which is perhaps why it is disarming when we encounter them in his video works, in which the solitary habits of his subjects are laid bare. The stories that Marti pursues are often of society’s more vulnerable citizens, with a focus on gay men. Marti works with shut-ins and drug users who he frequently encounters during sex acts and various other forms of intimacy, and then captures on camera. He tends to seek out the most isolated among us. Those who have been denied full access to human contact, who live in the shadows.

Marti’s newest video is no exception to this, and his most recent protagonist is reminiscent of an older New York, when the recluse was as much a part of the mythology of the city as was celebrity. Long before designer stores populated the streets of SoHo, men lived alone in basement studio apartments downtown, or on the streets, defining our impression of solitary life in crowded places.

Marti is extraordinary at drawing isolated people out of hiding, earning their trust and documenting their fragility. At times, this has caused adverse reactions to his work and he has been accused of instrumentalising the people in his films. This contention led to his inclusion in the exhibition, Social Documents: The Ethics of Encounter, (Stills Gallery, Edinburgh, 2011), alongside divisive artists such as Renzo Martens and Artur ?mijewski. The exhibition explored controversial relationships that artists strike up with their human collaborators and the extent to which these relationships are exploitative.

While the same cannot necessarily be said of all of his peers, Marti’s methods have a gentle touch. His subjects trust him, and for good reason. He sticks with people through the long haul, listening long after the camera is turned off, the gallery lights go down and most of us have stopped paying attention.

Marti’s video, Butterfly Man (2012), is on exhibit for the first time at Breenspace. It opens with a tightly framed composition focused on the upper body of a man named Mark, who is flagging. Flagging is a dance in which the performer waves weighted scarves alongside their body and Dani has recorded Mark making fluid movements. The camera focuses on a softly lit Mark, his mouth poised in concentration, his eyes glazed over and the musculature of his slight frame accentuated by continuous motion. Mark is in a trance.

As an art form, flagging emerged from the gay club scene. During the high-energy dance, colored flags are spun in patterns as an extension of the music, mixing liquid-like movement, technical skill and athletic intensity. Although there are numerous cultural influences sited for flagging, it’s said that the form draws inspiration from Japanese fan dancing. Through the title of the work, Marti sets up a correlation between the method and the Japanese legend of the butterfly, which in ancient times was seen as the personification of a person’s soul whether they are living, dying or already dead.

On screen, Mark seems to be propelled from within as if there is a force driving him. And indeed there is – his addiction. Mark is a meth addict and drifter who Marti met two years ago on a prior visit to New York. Though Marti filmed Mark during that initial visit, Butterfly Man consists of footage taken in 2012. Filmed over the course of two sessions, approximately six-weeks apart, the work feels like an almost seamless composition, shot with careful attention to detail. There is a barely perceptible cut between the first and second half of the video and the only real indication that time has passed is the physical change we notice in Mark. He has lost some weight, some teeth and one of his eyes is swollen shut. Marti depicts the flagging in contrast with Mark’s decaying body and his rapturous movements are rendered somewhat angelic by the slowed down frames and billowing scarves.

Also on exhibit in, MARIPOSA (BUTTERFLY), are new wall-mounted pieces. Marti’s weavings, which have garnered a lot of attention over the years, have been referred to variously as expanded paintings, textiles and sculptures. These taught and complex works are powerful to encounter. They are also undeniably sensual. TRAP, is a formal grid made of leather and aluminium. Marti has stretched the leather taught across the metal frame. There are no knots or adhesives keeping the piece in tact and the tension is palpable. ARMOUR by contrast are woven works, their many loose ends create layers, holding each other in place building layered surface tension. The knots, shadows and folds create a cocoon-like quality in the work, and the suggestion of a cocoon circles us back to the butterfly, reaffirming the cycle between birth, decay and death that Marti alludes to throughout the exhibition.

In Butterfly Man, Mark’s dancing is set up in contrast with his own decay. For many years, writers and curators have drawn a connection between Marti’s textiles and his video practice. It's tempting to use the weavings as a way into Marti's less accessible, but equally taught video works. The weaving may be a metaphor for the visceral overlapping of experience. Perhaps the textiles (read: domestic) make Marti seem trustworthy, feminised and accessible. This accessibility sits in contrast to his videos, which are stark, much less comfortable and utterly evocative.

Alhena Katsof (b. 1978, Montreal, Canada) is currently Volkswagen Fellow at MoMA PS1 in New York. In 2011 she was Museum as Hub Fellow at the New Museum in New York and co-curated, with Dean Daderko, Directing Light onto Fist of Father, a solo exhibition by the artist MPA at Leo Koenig, which included a performance that took place as part of Performa 2011. In 2010 she co-curated the project ‘I’m Not Here. An Exhibition Without Francis Alÿs’ at de Appel’s Boys’ School in Amsterdam with her colleagues from de Appel’s Curatorial Programme. While earning an MFA at the Glasgow School of Art in Scotland, she presented exhibitions under the pseudonym, A.Vermin between 2006-2009. Alhena has worked extensively with Public Movement (IL) and has contributed to magazines such as Canadian Art, MAP: Journeys in Contemporary Art, and Kaleidoscope. She graduated with a Liberal Arts degree from Hampshire College in Amherst, Massachusetts.

The work was developed during Dani Marti’s Greene Street residency in New York.
This project has been assisted by the Australian Government through the Australia Council for the Arts, its arts funding advisory body.